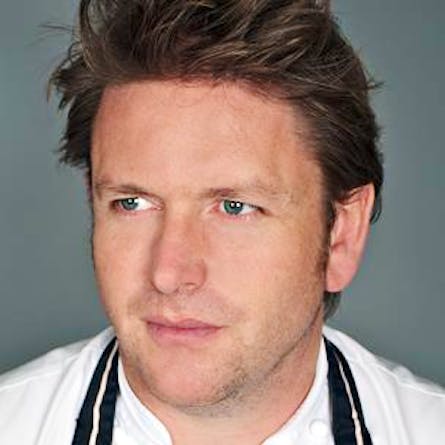 We managed to bag ourselves front row seats for the interview with the incredible James Martin. We were so lucky because looking behind us, the area was packed full of eagerly awaiting people ready to hear what James had to say.

James Martin was very entertaining and seemed more keen to talk about cars and planes which all the men in the audience were more than happy with! We first heard about the incredible career James has had where he has worked for the BBC now for nearly 20 years on various different programmes including Saturday Kitchen Live which he has presented now since 2006. He has also just finished The Box, which is a successful new series where contestants have to make meals out of a secret box of ingredients chosen by a celebrity guest.

It seems like James has an extremely busy schedule, he informed us he only had 9 days off work last year and with early starts for his shows, late nights for his restaurant it comes as no surprise that he wouldn’t mind a bit of time off! But don’t dispair, James will still be gracing our TV screens in August with his new series of Home Comforts. James was recently in Italy with Charlie Boorman where he took part in the Mille Miglia racing along with 450 other old vehicles from 1927 to 1957. This is one of his past times and he was really able to let his hair down, so much so they were caught doing 184 miles per hour in a 50 zone! It’s all part of the fun and is a great celebration for the public.

What car did you use in the Mille Miglia and did you finish?

‘Yes I did finish, we started 438th, it’s all related to the year it was built and we finished 208th which was the best we were ever gonna do really. It was Jaguar’s own personal car, the only one that’s never been sold of the Jaguar collection. It was a long nose D Type Jaguar and every morning you up after about a 3 hour kip and they handed you the keys and told you how much it was worth just so you realise to bring it back! But it was phenomenally expensive, only Jamies Oliver can afford that thing!’

James was also very keen on talking about flying which is one of his great loves. Whenever he can he will fly around the UK, even if it is just a quick tour…

When you fly where do you fly to?

‘Last time I went I flew to Sandsend for a 99 and a flake and I flew back again. The whole thing about flying is to keep your hours up and I don’t like to let my hours elapse to much, I try and get flying as much as I possibly can. 2 weeks ago I finished Saturday Kitchen and I flew to Sandsend and I had fish and chips and a 99 flake and flew back again, it was an expensive 99! But that’s kind of it, but I use it for work sometimes as well. Chris my chef, normally drives cause he hates me flying, the look on his face when you are in control of a helicopter is priceless! The UK is an amazing place but from 3,000 feet it is just beautiful and where you can go to and see is just fantastic. It’s one of the true joys you’ll ever have, being able to get in control of a plane and take off for the first time is the most scary thing but is also the most adrenaline-filled thing, just amazing! I’ve been flying now for 9 years and it’s ace.’

Questions then moved onto the slightly more relevant topic of cooking, which he was still just as passionate about as he was his other hobbies…

If you could cook for anyone in the world, who it be and what would you cook?

‘My Gran and anything she wants because if she could come back and see what her little lad has done, I think she would be quite happy. I’d take her flying as well!’

Who’s been your favourite guest on Saturday Kitchen?

Jackie Collins. She was amazing. Mainly becuase you have a perception of people, I don’t know if this is right or wrong but people have a perception of anyone when they meet them. We had some amazing people on recently and we had a load of Hollywood A-listers which were just fantastic….The first question I asked Jackie Collins was ‘so you’ve sold over 840 million books worldwide, how does that feel?’ and she went, ‘Well actually it’s 940, but what’s a couple of 100 million between me and you?!’ She is the only person in 10 years that’s ever to write to me to thank me very much, the only one! The letter is now in my toilet in a frame, together with a framed picture and a letter from Keith Floyd that he did about a week before he passed away.’

The conversation then moved onto the late, great Keith Floyd who was a true inspiration for James Martin, someone he thought was a fantastic influence with the passion he put into his cooking. When speaking about different chefs James said…

‘Too many young chefs nowadays wanna be superstars, in that sort of world you gotta keep your feet on the ground and I think older chefs such as Mary Berry are very influential around you. That kind of era is very unique and you can learn alot from people like that. Keith Floyd was a huge influence on me when I was a kid and as a chef you kind of look at what Keith did. I’ve been doing TV now for 20 years and I swear to God there is nobody better and nobody did it better than what he did. Every single clip he did was one take, he never did stuff twice, mainly because he was so hammered! I loved all that, cuase if it didn’t work he would just down tools and not do it, he was very free and true. He wasn’t this gastronomic chef, he was just a very passionate foodie and very knowledgable and just a great guy.’

You can really tell that James Martin is a passionate chef with years of knowledge and skills that will last him a lifetime. His end note was just fantastic and I want to share it with you all…

‘Thank you so much because, 20 years, I can’t believe it, is coming up and when that phone call came many moons ago for The Big Breakfast, the first person I cooked for was Zig and Zag. The second ones were The BeeGee’s and the third was Kylie Minogue, so it was going in the right direction! I can’t believe I’m here, I feel very privaliged and very honored so thank you very much.’

Keep posted on our Facebook page because very soon you could win yourself a signed copy of his book Home Comforts!