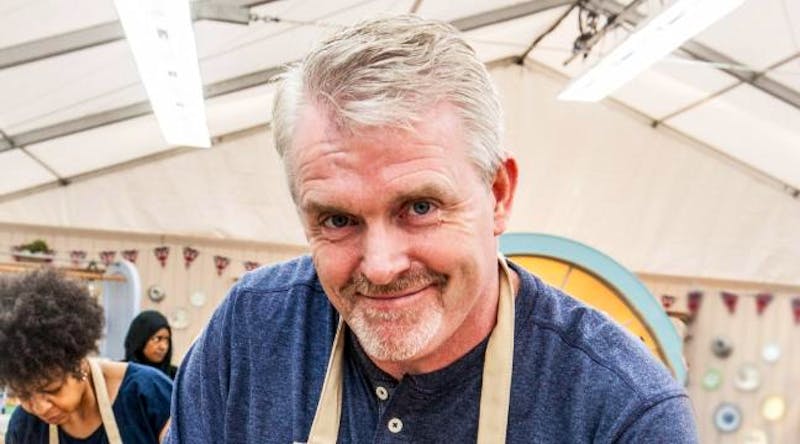 As the quarter final episode drew to a close it dawned on us that there are only 2 episodes left until we must wait another year to watch The Great British Bake Off. What a devastating end it was last night for Paul, and as a testimony to him we have looked back at his best bits…. Paul was never a front runner in the technical challenges, he was in the middle of the road for the majority of them except in week 4 when the contestants were asked to make a Spanicshe Windtorte. This is an Austrian dessert that is made out of meringue, cream and fruit, a simple recipe to look at, however to make and put together requires time, patience and a lot of skill. Paul shone in this round tipping the leaderboard in the technical challenge for the first time, unfortunately the only time!

In the 5th week of The Great British Bake Off, Paul impressed again with his showstopper Ice Cream Roll, with mango, lime and cocunut flavoured ice cream wrapped in an almond sponge. The roll was brilliantly decorated to look like a desert island with a lady sunbathing on the top surrounded by blue sea and 3D palm trees. Mary and Paul praised him for his ‘great flavour proportions and a finely decorated sponge’. Week 7 saw us watch the amateur bakers struggle with Victorian creations. Traditionally, Victorians were extremely elaborate with their decorations when it came to food. The more elaborate the decoration, the more you were perceived as being wealthy. So Paul created some fantastic fruit carvings including apple swans and strawberry roses, they really did look the part. Unfortunately they weren’t enough to wow the judges as his Charlotte Russe did not set in time.

King of The Jungle What a week this was for Paul, an incredible showstopper was presented to the judges that none of us could quite believe was edible when it looked that amazing! It blew the judges over so much he won himself a special commendation from the master baker himself, Paul Hollywood. The intricate design of the lion’s face, body claws and all, was outstanding and you could not ignore the terrific taste of the fluffy bread either. What a fantastic bake!

We will well and truly miss Paul and his fantastic designs. Let’s just hope he doesn’t give up on baking and carries on entertaining with elaborate creations…