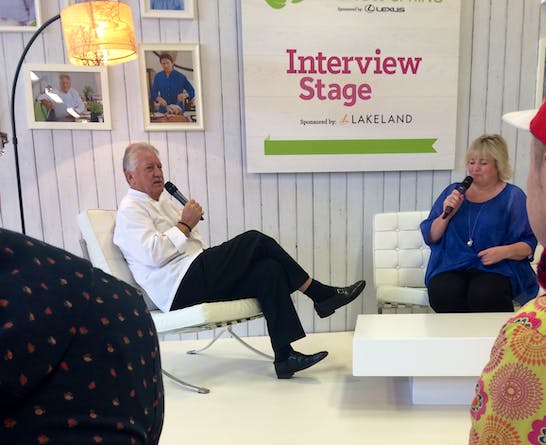 We had the pleasure to sit and watch an interview with Ready Steady Cook’s very own Brian Turner. He served an impressive 14 and a half years on the show and has appeared in various other programmes including This Morning and Saturday Kitchen.

Along with these appearances Brian Turner opened the kitchens of The Capital Hotel in 1971 winning a Michelin star. He then went onto opening his own restaurant, Turner’s in 1986 which led him to opening various others in the years after.

The chat was hosted by Lotte Duncan on the interview stage where we learnt all about his successful career as a celebrity chef.

One of the things everyone in the audience wanted know was whether him and the other chefs really knew what was in their bags on Ready Steady Cook, because how can they really of whipped of those incredible meals in only 20 minutes and without knowing what ingredients they were going to use?!! Well the answer was no! Much respect Turner, you genius.

Everyone wanted to know all about his adventures with Janet Street-Porter on The Taste of Britain in which he told us one hilarious story where they were asked to hug a tree and all Janet was doing was effing and blinding, we should have known she wouldn’t take it seriously!

Questions from the audience were brilliant and gave us an insight into Brian’s likes and dislikes. We found out that his guilty pleasure was…nothing! He loves jumbo fish and chips however they must be fried in Yorkshire!

One question was ‘what is your favourite recipe?’ Brian’s answer was that there is nothing better than his mum’s cheese and potato pie which he replicates well himself. But I’m sure not as good!

We then shot our hand up and asked a question ourselves…

Q: What would you say is the most essential item that you have got in your kitchen?

A: One has to define essential. When I travel the country demonstrating, I have a 4 inch deep 2 foot diameter chopping block that I love to take wherever I go, it is a pain to carry sometimes and I don’t always take it. I like to have a focal point on a demonstration theatre, likewise in the kitchen. Always go back to where you know where you’re at and you can fit things round it and when you’re planning a new kitchen, that’s what I would do, just make sure that I have that chopping board somewhere in the middle or a butcher’s block. Somewhere I can do all my prep and my organisation is something essential.

So there is some great advice, if you are planning a new kitchen, plan around a focal point. If you are a food lover then this piece of advice is perfect, plan your kitchen around a chopping board so you then can get to everything you need, quickly and easily.

What a pleasure it was meeting Brian Turner and he couldn’t of answered our question in a more relevant way!