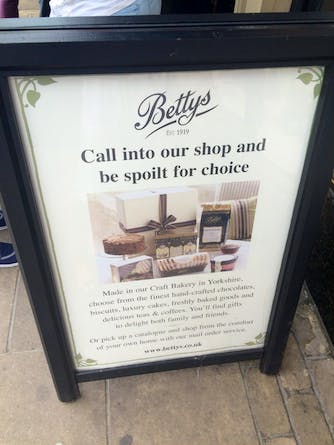 Bettys was founded by a Swiss baker and confectioner named Frederick Belmont who came over to England to help develop his skills in baking. This is when he opened Bettys Tea Rooms in Harrogate in 1919.

Bettys was so successful it expanded well and now has six beautiful tea rooms across Yorkshire and delivers all over the world. Although the business has grown, they are still devoted to keeping things as beautiful as they were when Belmont first opened Bettys.

To this day, no one knows why Belmont decided to call the tea room Bettys. There are many theories including; it was named after the late Queen Mother who was born at the turn of the century or Betty, a doctors daughter who died of tuberculosis, whose father’s practice on Cambridge Crescent later became the Café. The loveliest theory is when they had the first board meeting to decide on the name of the tea rooms, a young girl named Betty came in and interrupted. Whichever story is true, it is a beautiful mystery and one that will live on for a very long time.

At the BBC Good Food Show, we had the pleasure of having lunch at Bettys Tea Rooms in Harrogate. It was such an incredible experience that I believe everyone should do at least once. It isn’t like your ordinary afternoon tea, you are served exquisite sandwiches and cakes by authentically dressed waitresses whilst listening to the beautiful sounds of the pianist.

We enjoyed every mouthful and left feeling extremely satisfied and lucky to have spent an afternoon in such a beautiful place. The staff treated you with such grace and there was nothing they couldn’t do for you.

The array of teas you have to choose from is so big and caters to all tastes from the traditional Breakfast Tea through to China Rose Petal, a blend of lovely aromatic flavours. The tea was served with a lovely silver tea set where you strained the tea yourself to give you the freshest of tastes.

Bettys is a unique experience with unique baking delights that you won’t find anywhere else, however if you want to try out baking like the Bettys team, they have a cookery school run by their talented bakers and expert chefs who will help you master everything from bread to chocolate making. Along with cooking courses, they also offer classes on perfecting skills such as knife skills. Click here to find out more about their courses and when they are on.

These are courses not to be missed as after tasting the delights, you are guaranteed to sign up straight away to try the baking out for yourself at home.

Bettys is a firm believer in trading fairly and their main aim is to become a role model business. Right from the people who grow their tea and coffee through to their customer, they believe that everyone should be treated with respect and integrity. This is reflected strongly through the complete care and attention that each employer puts into their own role.

If you are out of reach of any of the tea rooms, don’t forget to visit the website where you are able to order speciality teas, cakes and treats right to your doorstep.

Afternoon tea at Bettys was a true delight and one we shall remember for a long time, a definite recommendation to anyone!