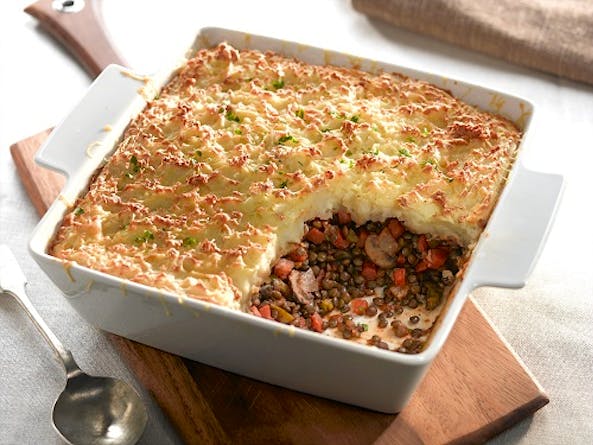 It’s British Pie Week! In these first seven days of March, we get to celebrate the simple, yet delicious wonder that is the British pie – and there’s a whole host of favourites to choose from! After all, we Brits take pride in our pies.

Whether you prefer classic pastry-topped pies, like meat and potato pie or steak pie, or your sweet tooth has a longing for fruit pies, there’s something out there for every British pie lover.

In this article, we suggest some pies for you to whip up (or purchase from the shops – your move) in celebration of British Pie Week.

You can’t get more classic than the meaty cottage pie, a comforting, savoury dish consisting of ground beef nestled beneath a creamy layer of mashed potato. This hearty pie is said to have originated from the shepherds who lived in northern England many years ago, which is why this pie is sometimes called shepherd’s pie (and, accordingly, this variation is stuffed with lamb instead of beef).

BBC Good Food’s cottage pie recipe is worth trying. With 760 reviews and an overall five-star rating, it’s bound to be a winner.

We move now to the south of England – specifically, to Cornwall, birthplace of the traditional Cornish pasty. It’s easy to see why this flavourful, crispy pastry is the pride and joy of the Cornish – you only need only take a bite to be sold.

The Cornish Pasty Association offers their own recipe for authentic Cornish pasties, so you can be sure you’re making the genuine thing. Beef skirt, swedes, bread flour and lard are just some of the ingredients that make a Cornish pasty a Cornish pasty.

Dessert lovers, this one’s for you. The truly British banoffee pie hits all the right spots. We’re not sure if it’s the bananas, the caramel filling, the digestive biscuit base or the cream topping that really sells this dessert. Perhaps it’s all four working in harmony.

BBC’s banoffee pie recipe is bound to satisfy your sweet tooth in no time. Dessert for one, anybody?

You can’t get more ‘classic British pie’ than a steak and ale pie. More than mere pub grub, this beef, vegetable and ale filled pie is hearty, warming goodness bundled inside a flaky pastry shell. This rich pie is a British favourite for good reason.

Allrecipe’s steak and ale pie recipe uses mushrooms for a truly rich, tender pie that will absolutely melt in your mouth. Cheers to a great, British pie!

Another British favourite is the pork pie, traditionally made from a thick, hot water pastry raised by hand using a mould or a jam jar, with a delectable filling of pork jelly and juicy minced or chopped pork. These pork pies were well loved by hunters, farmers and travellers back in the day, as these pies are conveniently portable. This great recipe from The Spruce Eats takes the guesswork out of creating the perfect pork pie.

Now if you’ll excuse us, we’ll be celebrating these last couple days of British Pie Week with some pie of our own.