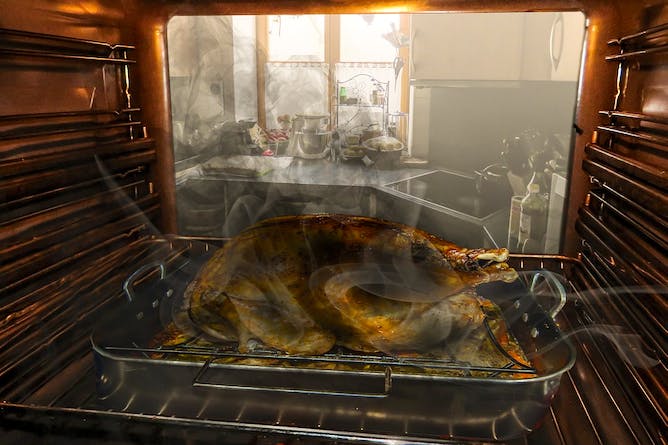 So, can we mention the ‘C’ word now? Since, ssshhhh *whisper it* Christmas preparations seem to be well on the way for most people, we’re thinking that it may be fine to start talking about the big day itself. And if you’re someone who loves December 25 but always finds the cooking part a little on the stressful side, we’re taking the hassle out of it for you by bringing you some much-needed kitchen tips.

Today on the My Appliances blog, we’re talking about the appliances that’ll make Christmas easier. It’s likely you’ll have at least one, maybe two, of the appliances mentioned in this blog – and the trick is not to be too hard on yourself if you decide to use them. Now, let’s all get set for a stress-free festive season!

Don’t waste time and energy whisking your jus and your custard with a manual whisk. Instead, invest in a multi-tasking (they generally feature a dough hook, as well as a whisk attachment) freestanding electric mixer and you can leave the machine to do its thing while you get on with another task or two. If you’re pushed for time on Christmas morning and your guests are due to arrive, it may just help you claw back 10 or 15 minutes. Ah, the microwave! While many will deem you a failure if you turn to this handy household appliance to heat gravy and whatnot, the person who has Christmas day timings down to the very last, piping hot and buttery sprout will know that, sometimes, you just need to admit defeat and heat a few things up in this most trusty of appliances. Warm the gravy up while your guests are watching the Queen’s Speech and they probably won’t even hear the microwave ping over the clinking of wine glasses.

Need a new oven? That’s where we come in! And with some early bird Black Friday deals on offer, you may even be able to bag yourself one at a discounted price. No longer will you have to cook things separately; with a top of the range oven with plenty of shelves, you can ensure everything’s warm and ready to be served at the same time – hooray for forward planning (and a great oven!).

Worried you won’t have enough time to do everything you need to do on Christmas day itself? Prepare a few things in advance – and this is where that slow cooker you received last December 25 will come up trumps! Rescue it from its dusty box and chuck in some veg, some stock and maybe even a bit of meat – and voila, you have yourself a starter of soup for your festive meal.

Planning to serve a fourth course of coffee and chocolates and/or shortbread? Your coffee machine will ensure an authentic-tasting mug of the brown stuff – and a little bit of added froth. You know, like they do in the coffee shops. If you’re whipping up cappuccinos, don’t forget the added sprinkle of chocolate – and maybe even some cinammon and a side of candy cane or After Eight mint! It is Christmas, after all.

What are your top tips for a stress-free Christmas? Join the conversation on Facebook and Twitter and let us know.