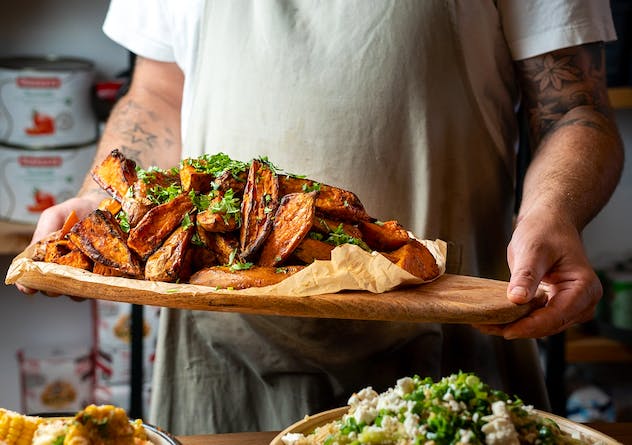 This November is World Vegan Month! No matter what your reasons for going vegan are, one thing remains in common about virtually all vegans: the diet. In a nutshell, most fully vegan diets cut out all forms of meat, including fish and seafood, as well as dairy and eggs.

This can seem like a bit of a challenge when it comes to creating meals, but a vegan diet is in no way limiting. There’s no need to kiss goodbye to your favourite pastries, just because most of them are not vegan. This month’s all about finding creative solutions catering to your vegan diet.

In this blog post, we’ve gathered some vegan recipes that are just as good, or even better, than the real deal. Read on…

Vegan burgers can be just as tasty as real beef burgers, and the texture can even come close to the actual thing. You certainly won’t be missing out during family get-togethers.

To make vegan burgers, buy vegan patties from your local supermarket – or, if you’re up for a challenge, make them from scratch! This recipe from Jamie Oliver uses chickpeas and sweetcorn blended in a food processor to make the patty, but you can also use other ingredients that take your fancy. Black beans and mushrooms make a great patty ‘filling.’

Who doesn’t love a cheesy pizza? Even vegans can enjoy pizza, thanks to a wonderful little ingredient called vegan cheese. That’s right: you can get the same comforting tastes and textures of real pizza without the dairy!

This recipe uses vegan mozzarella-style cheese to put a dairy-free spin on classic pizza Margherita. You’ll enjoy making this pizza from scratch, not to mention eating it when it’s all done.

Spaghetti Bolognese is another classic Italian dish that vegans might feel like they’re missing out on. After all, ground beef is an integral part of the recipe.

Not to worry. Soy-based veggie mince or whole lentils can be substituted in for ground beef, as is the case in this recipe. You also have the option of using vegan red wine, as well as vegan syrup, for extra vegan-friendly flavour.

For a loaded, hearty and – most importantly – vegan-friendly take on hot dogs, look no further than this recipe. Vegan hot dogs (available at your local supermarket) and chargrilled veg make for a flavour-packed dish that’s like summer on a plate. You can make this on a grill for the true barbecue experience, but a regular pan will do just fine.

We’ve saved the best for last, in true dessert fashion. The good news is, you don’t have to give up brownies for good when you go vegan. While most brownie recipes call for eggs and milk, you’ll be glad to know that this vegan-friendly recipe does not.

These vegan brownies are a doddle to make. Like regular brownies, they’re just a little crispy on the outside while remaining soft on the inside, but don’t use dairy or eggs. Make sure to grab seconds – or thirds!

We hope you enjoy these vegan-friendly recipes!