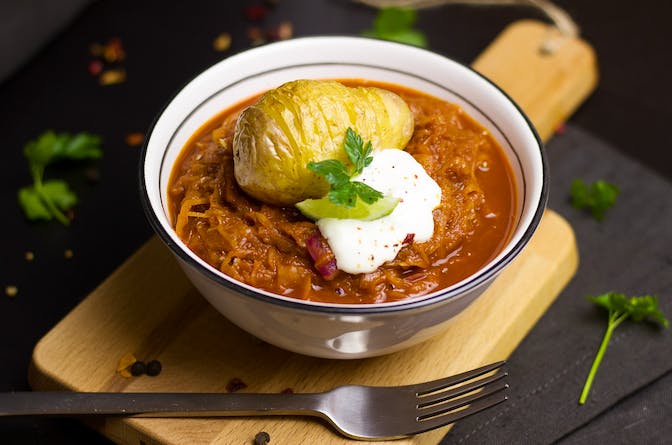 Autumn’s coming! That means home comforts like stews and cheesy pasta bakes – yum. It also means evenings curled up in front of the fire, hot chocolates aplenty and wrapping up warm for cold, crisp walks.

If you’re a fan of autumn, you can probably already smell the cinnamon atop your favourite, seasonal takeaway coffee. Or maybe you’re already getting lost in daydreams about jacket spuds, baked in the oven, wrapped in tin foil and enjoyed around the bonfire on November 5. Anyway, we digress…

The point is this: autumn is mere weeks away, so isn’t it about time you dusted off your slow cooker, ready to whip up all manner of comfort food? We say ‘absolutely’. So, stick your head in the back of the cupboard and dig out that croc pot. Now, let’s take a look at some recipes you’ll definitely want to try…

Who doesn’t love homecooked chilli con carne? Especially when the flavours have been marinating all day in the slow cooker. Delicious with a capital ‘D’.

If you don’t have a failsafe recipe, BBC Good Food leaps to the rescue with this one. ‘Use whichever beans you have in the cupboard for this richly spiced beef and chipotle slow cooker chilli – the perfect meal to prepare for busy weeknights’, says the site.

You could also try taking out the meat – if you’re a family of veggies – and substituting with a plant-friendly alternative. Either way, everyone is bound to love this comforting meal.

There’s something about chicken soup that just screams autumn and winter, isn’t there? It’s a great dish to warm up for lunches in the office or served as a main meal at night with plenty of homemade bread. It’s also ideal when anyone in the family comes down with a cold, as it’s so easy to eat when you’re feeling less than 100%.

Again, head to the BBC Good Food website for all the details.

Put your slow cooker to good use yet again with these pulled chicken apple cider sandwiches. We bet you’re salivating at the mere thought of that teatime treat, aren’t you? The Cupcakes and Kale Chips website has the recipe and it looks like a winner to us.

Okay, so this isn’t a recipe for the slow cooker but what autumn evening in the house would be complete without a delicious, homemade apple pie?

Taste of Home has all the details you require to make this sweet treat. It’s an all-American favourite but it’s certainly a staple in UK households, too.

A Taste of Home regular has this to say about this childhood dish: ‘I remember coming home sullen one day because we’d lost a softball game. Grandma, in her wisdom, suggested: “Maybe a slice of my homemade apple pie will make you feel better.” One bite and Grandma was right’.

Try it, too – just remember to convert the American ‘cup’ measurements to grams or ounces, or whichever you prefer.