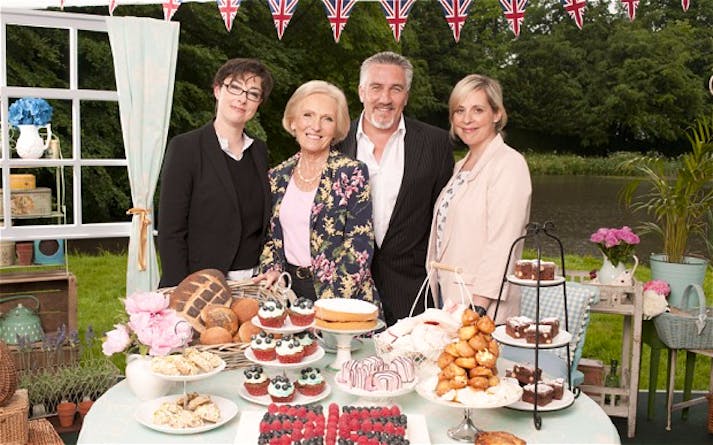 It seems an absolute age since the last series of Bake Off, but guess what? The hit BBC show is back next Wednesday and the team here at My Appliances can’t wait. Sure, it ain’t going to be very good for our summer health kick (all that cake is enough to tempt even the biggest health devotee away off the straight and narrow!) but we’re not too fussed. As if you needed another reason to tune into the Bake Off, we’re bringing you five of them. FIVE. Read on…

1.Cake. Well, obviously – So aside from the competitive element of the Great British Bake Off, what’s the number one reason we all tune into the BBC favourite? Cake. That’s what. The chance to drool over a light and airy Victoria sponge, or a naughty but nice chocolate cake is, without doubt, the closest thing to actually eating the cakes themselves #greatforthediet

2.Cake-related Puns – The only thing better than real, live ‘so-delicious-looking-you-can-almost-taste-it’ cake? Cake-related puns. And presenters Mel and Sue have them in abundance. In fact, they can’t sidle past so much as a fairy cake without saying something risque. We can’t wait. 3. Things Going Wrong – Okay, so we all like to get behind our favourite contestant but there’s something quite car crash-like about things going wrong on the Bake Off – you don’t want to look but you kind of can’t help yourself. Who wasn’t glued to the screen during ‘Baked Alaskagate’ of 2014, after all? That episode was so tense we didn’t think we’d be able to see it all the way through. But we did – and felt very sorry for the poor baker in question in the process.

4.The Fact That it Isn’t the X Factor – We all love a bit of X Factor but during the ‘bad auditions stage’ only. After that it gets a bit much. There’s only so much of Simon Cowell’s putdowns you can listen to, isn’t there? The Bake Off, though, is a reality show with a difference; a programme which encourages its contestants and actually – gasp – wants them to succeed too. And that’s one of the biggest reasons to love it.

5. Mary and Paul – Oh, what would the Bake Off be without Mary and Paul? Paul’s cheeky comments, Mary’s pupils dilating when she discovers a cake contains booze…the show really does have it all.

Will you be tuning into the Great British Bake Off next week? And tell us, what’s your favourite thing about the show? Or do we have it covered above? As ever, make sure you join the conversation over on our Facebook page – and don’t forget to follow us over on Twitter too. You might have missed our recent competition to win a Bake Off-style mixer. Well, never fear; keep an eye on our page for more of the same very soon.

Psst! The Telegraph has just released the list of 2016 Bake Off contestants; why not whet your appetite for the new series and take a look.