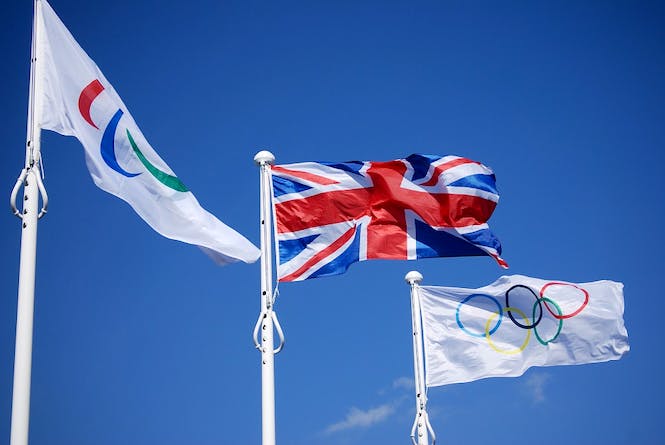 With the Olympics in full swing, what better time than now to whip up a few tasty treats in the kitchen? Whether you’re having a few pals round for a full night in front of the telly, or you’d just like to make a few nibbles for the family, we’ve got you covered!

We’ve done the hard work so you don’t have to, trawling this here Internet for some of the best Olympic-themed party recipes out there. So grab your pinny and get that oven on; this week’s blog is an absolute corker. If we do say so ourselves. Okay, so this isn’t the British flag – but there’s no reason why you can’t have a go at the cake (above) and recreate the layout with a union flag theme. Use raspberries and blueberries for decoration and tuck right in!

This looks like a simple Victoria sponge cake, baked in a rectangular pan. Why not give it a go? In fact, this kind of cake doesn’t have to be reserved for the Olympics; you can try it yourself any time and it’d be perfect for lazy summer picnics, family barbecues or at-home afternoon tea.

Even more sweet treats now…in the form of these lovely doughnuts via the Six Sister’s Stuff blog. In fact, head over to the blog if you can – there’s all sorts of tasty-looking treats to be found over there. And these doughnuts aren’t too taxing to make either.

Light Up the Festivities

It isn’t all about food, you know… Reminiscent of fiery Olympic torches, these cocktails – via Rachel Ray Mag are bound to get people talking. They look great and taste it too; a mixture of fruit, limoncello and soda, they pack a fiery punch on the old taste buds. Like the look of them? Click the link above and get to grips with the recipe.

Grab a Pizza the Olympic Action

A party wouldn’t be quite the same without some savoury food choices, now would it? And this idea – via babycenter.com – is a real winner. Easy to make and effective in appearance, veg and other food items can be prepared in Olympic ‘rings’ on a pizza base or garlic bread and served as is. With hardly any preparation time, this is a great choice when time is poor. Bung it in the oven and serve when your guests arrive. Failing that, why not arrange raw tomatoes, gherkins and other nibbles in a similar way but on individual plates? These can then be paired with dips or just eaten on their own – simple!

Got guests staying the night? You could treat them to an Olympic-themed breakfast in the morning too, thanks to this simple pancake recipe via Food Network. All you need is a little food colouring and voila! Will you be giving any of these recipes a go before the Olympics comes to a close? Let us know by joining the conversation over on the My Appliances Facebook page.